Although we still eat meat, Loretta & I try to limit our consumption for ecological, health, and ethical reasons.  Raising animals on an industrial scale for butchering is both an environmental & moral disaster. We eat a lot of vegetable protein & have tried plant-based Beyond Burgers which are absolutely delicious.

One thing I've been watching for awhile that could revolutionize meat consumption in the world is lab-grown meat.

I just saw this article that says artificially-grown meat has been approved for sale by regulators in Singapore.

This is a big step in the right direction of finding alternative way to produce meat protein products.

10-17-20
Paul Micarelli & son Paul Giuseppe take a walk and talk about interesting topics. 🤔💡👶🏻
***Please LIKE & SHARE, Thank You!***
More info at: http://www.ConsciousLivingForYOU.net
Posted by paul_mic at 1:57 PM No comments:

10-14-20
Paul Micarelli & son Paul Giuseppe take a walk and talk about interesting topics. 🤔💡👶🏻
***Please LIKE & SHARE, Thank You!***
More info at: http://www.ConsciousLivingForYOU.net
Posted by paul_mic at 1:28 PM No comments:

10-9-20
Paul Micarelli & son Paul Giuseppe take a walk and talk about interesting topics. 🤔💡👶🏻
***Please LIKE & SHARE, Thank You!***
More info at: http://www.ConsciousLivingForYOU.net
Posted by paul_mic at 11:56 AM No comments:

9-28-20
Paul Micarelli & son Paul Giuseppe take a walk and talk about interesting topics. 🤔💡👶🏻
***Please LIKE & SHARE, Thank You!***
More info at: http://www.ConsciousLivingForYOU.net
Posted by paul_mic at 10:44 PM No comments: 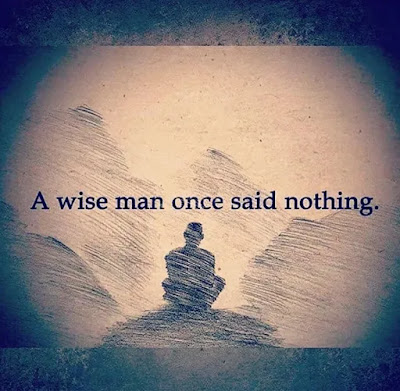 seen on r/mindfulness
Posted by paul_mic at 2:47 PM No comments: 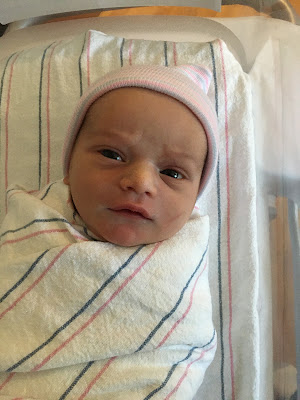 Let me tell you the story of the eventful birth of our son Paul Giuseppe Micarelli, the survivor- who has already lived through so much with me & Loretta, his warrior mother...

In the midst of the craziest time in modern history - with pandemics, riots, and social upheaval - Paul was born into even MORE crazy circumstances.

We planned to have a natural water birth in our home, with the assistance of a midwife. Things did NOT go according to plan, to say the least!

Loretta's water broke around 12 midnight on Fri. 6/13/20 after having a few days of contractions, so we called the midwife. We were as prepared as we were going to be, and after the midwife arrived were waiting through the early contractions.

The midwife decided to do a check around 3AM, & I walked out of the room to give the women privacy. After a minute or 2, I was called back in to horrible scene that I will never forget. My wife was on her hands & knees crying, and the midwife looked panicked. The midwife told me she had already called 911...

The umbilical cord was in front of the baby's head. If he continued to come out, there was a chance he would have the cord's circulation cut off. I woke her mom Donna up on the couch & told her to get up. We went back in the room trying to comfort Loretta, but were both absolutely terrified.
We had cops & medics at the house within minutes. Loretta went in an ambulance to Jefferson Hospital, still on her hands & knees with the midwifes hand inside her the whole time, who was holding the baby's head up to prevent his oxygen from being cut off. Loretta had to get an emergency C-section, due to a prolapsed cord. Her mom came with me & we followed the racing ambulance, full of worry and fear for Loretta and the baby.

We were all very scared & upset that this happened. We were rushed into the ER, and met with the medical team who insisted on putting Loretta under for the surgery. Loretta (still in the same uncomfortable position & midwife holding the baby's emerging head!) pleaded for a risky spinal, even though she couldn't sit up, so she could be awake for the birth & because she was afraid to go under anesthesia. She had a very bad feeling about losing consciousness at that time.
The team walked out of the room to discuss, & then reluctantly agreed to give her the shot while on her side- with the stipulation that they would only try the spinal once & then they would have to go with the original plan.

Loretta was taken away for the longest few minutes of my life while the shot was given... & it worked! I was rushed into the operating room, where Loretta was already being prepped for surgery.
The procedure only lasted 5-10 minutes, and I tried to comfort Loretta as much as I could, although I was scared out of my damn mind... When we finally heard the baby's cry, we both let the tears flow out of pure joy & relief.

Everyone is fine now! Paulie is such a good baby. We’ve been holding him & loving him like there's nothing else in this world, grateful he's still alive. He’s so peaceful, both when sleeping and awake.
Loretta is recovering from the C-section & is already walking around after 1 day.

This has been the wildest emotional roller coaster of my life, & as I write this I've cried once again- out of remembering the pure terror of the beginning & then the indescribable joy of his successful birth. It's all still very overwhelming.

We are so grateful for everyone's love and support through such an important time in our lives. We look forward to you everyone meeting this amazing (& cute) little guy!


*Posted on Paul Giuseppe's 1-month birthday. Originally posted by Paul at The Monkey Buddha blog.
Posted by paul_mic at 2:44 PM No comments:

My wife Loretta left her yoga mat out on the living room floor... so the cats naturally had to lay on it.

Our one cat, Tude, who we also call "Guru Tude," wanted to show us some of his poses. Here he is in one of his favorite stretched out positions, called "Supine Feline": 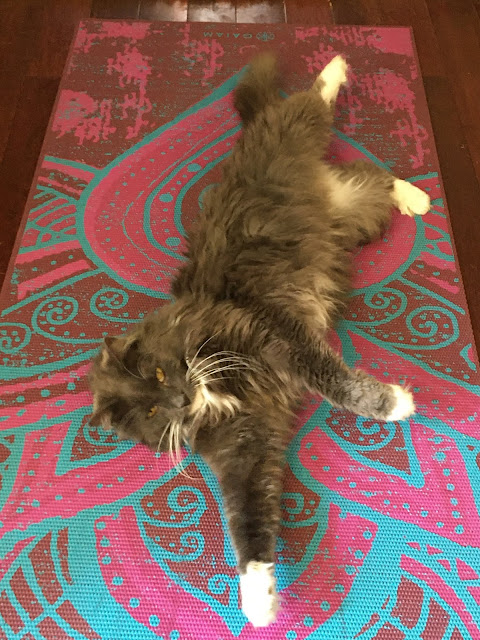 -Paul Micarelli
Posted by paul_mic at 4:30 PM No comments:

Conscious Living For You held a workshop at Valley Park Elementary School in Pennsville last week.

Paul & Loretta Micarelli gave a presentation on stress reduction, and provided activities such as breathing meditations and some light yoga poses. 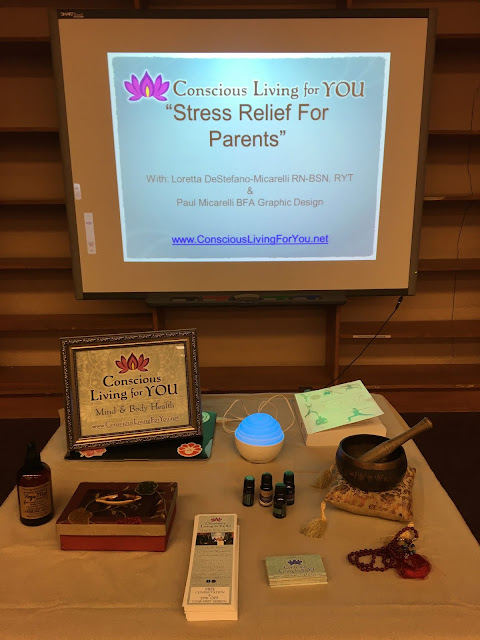 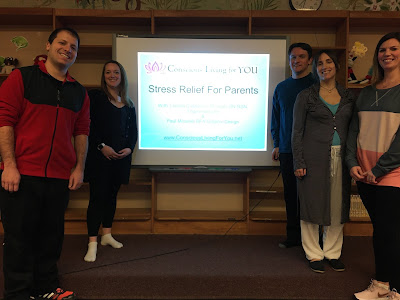 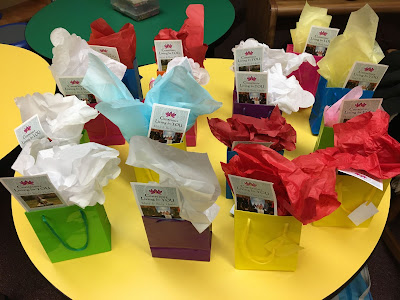 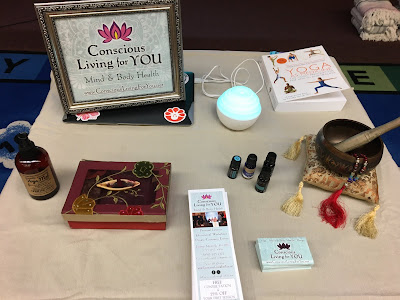 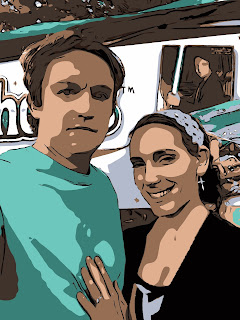